The Blue Sky Gallery is a special balloon portion of the Parade, which invites contemporary artists to transform their original creations into novelty balloons.

The first balloon of the Blue Sky Gallery series was Humpty Dumpty, a creation by the controversial sculpture designer, Tom Otterness. The design depicts him in an upside-down pose, accompanied by a giant foam figure of "One of the King's Horses and One of the King's Men". So far, he is the only Blue Sky Gallery balloon to have made more than one appearance, lasting from 2005 to 2006.

The second balloon of the Gallery was designed by the metal balloon-animal-like figure creator Jeff Koons. The design of this balloon shows a silver rabbit holding a carrot. Unlike Humpty Dumpty, the Rabbit only lasted one year, and so would his successors of the Blue Sky Gallery.

The third balloon of the Gallery was made as a tribute to the late graffiti artist Keith Haring, to celebrate what would have been his 50th Birthday. This design features a stick figure lifting a heart, and so far, it is the only balloon to have a "flat" design.

After its leap of absence in 2009, the Blue Sky Gallery series returned in 2010 with the addition of KaiKai and KiKi. These balloons were designed by Takashi Murakami, who appeared alongside them on a toy float during the march.

The fifth balloon in the Gallery was designed by filmmaker Tim Burton, who is famous for creating the Walt Disney stop-motion holiday film, The Nightmare Before Christmas. The design features a Frankenstein-like creature named B. (sometimes referred to as "B-Boy" or "Balloon Boy"), who was stitched together with old balloons after a birthday.

The Gallery's sixth balloon was created by the motif designer, KAWS (real name Brian Donnelly). This balloon depicts his most famous character, Companion, depicting him in his "Companion Passing Through" pose showing him covering his eyes. This would also be the final balloon in the Blue Sky Gallery for a while.

The Blue Sky Gallery series returned from its 5-year-hiatus in 2018, to help create the Little Cloud balloon by FriendsWithYou. In addition to the balloon's appearance, he was joined by two Raindrop walk-around characters, as well as an inflatable rainbow, which was lifted by his creators, Samuel Borkson and Arturo Sandoval III. Like most others from the Blue Sky Gallery, he only appeared once and was retired afterwards.

Yayoi Kusama, the world's most famous female contemporary artist, debuted a brand new balloon in the 2019 Parade titled "Love Flies Up to the Sky" as part of her 90th birthday. The Love Flies Up to the Sky balloon was developed by the artist from face motifs that appear in her My Eternal Soul series of paintings--a body of work that she began in 2009. Vibrant and animated, the paintings embody Kusama’s innovative exploration of form and revolve around a tension between abstraction and figuration. The artist’s signature dots — which recur throughout her practice — also feature prominently in the Macy’s Parade balloon design. However, strong winds caused this balloon to get damaged overnight, which resulted in it becoming the first Blue Sky Gallery balloon to get removed from the Parade. Whether or not the balloon will return in the 2020 Parade after the incident remains unknown, due to the usual one-year tenure for the Blue Sky Gallery series. 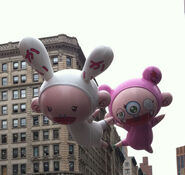 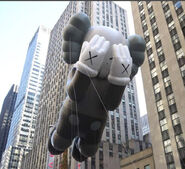 "Love Flies Up to the Sky" by Yayoi Kusama (2019)
Add a photo to this gallery
Retrieved from "https://macysthanksgiving.fandom.com/wiki/Blue_Sky_Gallery?oldid=101279"
Community content is available under CC-BY-SA unless otherwise noted.