Float
Foster's Home for Imaginary Friends is an American animated television series created by Craig McCracken for Cartoon Network Studios. The series, set in a world in which imaginary friends coexist with humans, centers on an eight-year-old boy, Mac, who is pressured by his mother to abandon his imaginary friend, Bloo. After Mac discovers an orphanage dedicated to housing abandoned imaginary friends, Bloo moves into the home and is kept from adoption so long as Mac visits him daily. The episodes revolve around Mac and Bloo as they interact with other imaginary friends and house staff and live out their day-to-day adventures, often getting caught up in various predicaments.

From 2006 to 2008, the Macy's Thanksgiving Day Parade featured a float sponsored by Cartoon Network representing the characters from Foster's Home for Imaginary Friends. The float featured a recreation of Madame Foster's imaginary friend orphanage, with various trees and grasswork decorating the float. The characters - Bloo, Wilt, Coco, Eduardo, Cheese, and Mr. Herriman - were puppets made for the float by an Atlanta-based puppetry troupe. In 2007, Bloppy Pants, Jackie Khones, and Fluffer Nutter were added as supplemental characters. The float retired after the 2008 parade due to the show ending 5 months later.

The Other side of the Foster's Home for Imaginary Friends Float with Mr. Herriman and Cheese from 2008. 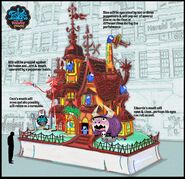 The Concept of the Foster's Home for Imaginary Friends float from 2006.

Rick Astley performing "Never Going Give For You Up" Song (AKA: Rick Roll!) on the Float in 2008.
Add a photo to this gallery
Retrieved from "https://macysthanksgiving.fandom.com/wiki/Foster%27s_Home_for_Imaginary_Friends?oldid=113873"
Community content is available under CC-BY-SA unless otherwise noted.