Ram Trucks, stylized as RAM and formally known as the Ram Truck Division, is an American brand of light to mid-weight commercial vehicles established in 2010 as a division of FCA US LLC, a wholly owned subsidiary of the Italian-American corporation Fiat Chrysler Automobiles. It was spun-off from Dodge marque, using the name of the Ram Pickup line of trucks. Ram Trucks' logo was originally used as Dodge's logo.

Starting in 2015, Ram Trucks partnered with Macy's to have their trucks pull their Floats down the Parade route, having taken the place of GMC as the official truck sponsor of the Parade.

In 2017, a Ram Trucks commercial was released about their sponsorship for the Parade, which cameos Tom Turkey and the Yellow Macy's Stars in the commercial, as well as being used for the commercial's filming. However, in late 2018, the commercial was deleted from their official YouTube channel for an unknown reason, and it is unknown if it will ever be re-uploaded. Despite this, behind-the-scenes footage of the commercial can still be found to this day.

In 2019, two other cutsom Ram trucks were added to the fleet, now coinciding with the floats of Green Giant and Santa's Sleigh, the latter of which was designed by Joel Naprstek.

Below, you will find a gallery of the custom Ram trucks featured in the Parade. 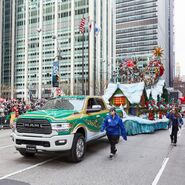 Add a photo to this gallery
Retrieved from "https://macysthanksgiving.fandom.com/wiki/Ram_Trucks?oldid=79841"
Community content is available under CC-BY-SA unless otherwise noted.