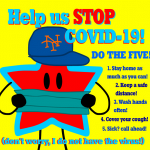 aka Shea the Superstar

Hello, Parade fans! My name is Inflatable&SportsGuy1986, but you can refer to me as Liam/Shea. Alongside JamarcusMudkip, I am one of the current owners of this Wiki.

Although some of you might beg to differ, I pretty much love the Parade more than anyone else here does in my opinion, and I'm also one of only a small handful of users on this Wiki who actually saw the annual spectacle in person! I've been going every year since 2007, at the tender age of 5. My favorite balloon is Astronaut Snoopy (2019 version), while my favorite novelties are the Yellow Macy's Stars, and my favorite float is the 1-2-3 Sesame Street float.

Alongside my love for the Parade, I am also an artist, much like many other art powerhouses on this Wiki, such as TheSpongeBobandLoudHouseFan2007, TiffAndTuffFanJr1, JamarcusMudkip, etc. However, I am not just an artist...I am also an ANIMATOR!

Yep, and as an animator, I am the official owner of Shea the Animation Superstar! So come check out what talent I have in store for you guys...

Want crazy adventures with pop-culture Easter eggs? The Gremlin Gang is for you!

Alongside MPM and TGG, Shea the Animation Superstar will also be the home of what might be the World's first-ever animated Macy's Parade fanmake, the 1986 Celebration Parade!

As my mascot and MPM character counterpart, Shea the Superstar, would say, I'm the star of the show...literally!

My Other Social Media Accounts

Retrieved from "https://macysthanksgiving.fandom.com/wiki/User:Inflatable%26SportsGuy1986?oldid=100799"
Community content is available under CC-BY-SA unless otherwise noted.