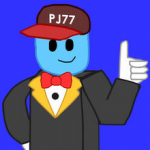 aka HEHEHE I AM A SUPERSTAR WARRIA

​​​​​​Hello, fellow balloonatics I'm Polarjack77, The Prince of Balloonatics! and I am one of the first users for The Macy's Parade Wiki and one of the original admins on the wiki aswell. I also can't wait to see what the 2020 parade gives us.

I am the 3rd most biggest fan of the parade (I said that because I don't want to start fights with Liam and Jamarcus). And 90% of my wiki admin career I usually ban people from the chat. And I also do units for IME's Big Balloon Parade and The 1986 Celebration Parade (I don't draw the balloons I usually have ideas). And most of the time (usually the off season for the parade) I do plays from somewhat popular musicals. The few "well-known" plays in the community which I did was my Fall 2016 play Elf: The Musical which tells the story of a orphan named Buddy (or his real name William) travels to NYC in search for his dad. And my summer 2018 play Once Upon a Mattress tells the true story of The Princess and The Pea. However one of my favorite musicals that I wasn't in are The Rocky Horror Picture Show ​​​​​, The Music Man, Hamilton and Grease.

I also went to the freezing 2018 parade which was amazing and wish to do it again for the 95th Anniversary parade. And I also can't wait to see what the future holds for the Macy's Parade.

Retrieved from "https://macysthanksgiving.fandom.com/wiki/User:Polarjack77?oldid=100817"
Community content is available under CC-BY-SA unless otherwise noted.